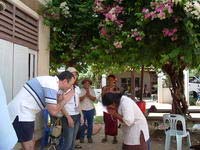 The Thai are a proud nation of people with a long history and well-established, complex hierarchal structure of status. Starting with the Royal family and percolating down, everyone in Thailand knows and respects their place in society. A polite Thai (which is most of them) will usually immediately identify whether another is of higher status than them (usually deemed by age or wealth) and initiate the ‘wai’ – a submissive and graceful bringing together of the hands to the chest or beneath the nose (to show ultimate respect). Even on a social level they will refer to their elders as ‘pii’ (older sibling). In fact social grace is paramount and the formal suffix ‘kha’ (female) and ‘khrup’ (male) is added to the end of all sentences when addressing strangers, employers/employees or elders.

There are many other habits of etiquette which the foreigner will do well to observe, the most important being to avoid loss of face by losing your temper. The feet are considered dirty and should not be pointed directly at people or raised; shoes are usually never worn in indoor living areas and the head is sanctified, so avoid touching someone else on the head, unless they are an intimate friend. Contrary to popular impression, Thais are quite conservative and expect visitors to dress appropriately in formal public places. They are also discreet about showing affection, especially in public. Holding hands is considered taboo among the older generation.